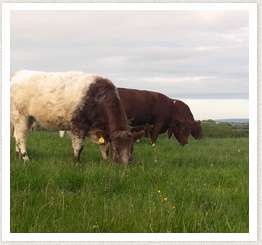 The Shorthorn breed of cattle, which we know today, has evolved over the last two centuries, from Teeswater and Durham cattle found originally in the North East of England. In the late 18th Century two brothers, Charles and Robert Colling, started to improve these Durham cattle using line breeding techniques established so successfully by Robert Bakewell on Longhorn cattle.

In 1783 Charles Colling found four particular cows recorded as Duchess, Cherry, Strawberry and Old Favourite among others, and at the same time his brother, Robert, had noticed the superiority of calves in the local market breed from a bull known as Hubback, which he subsequently bought for £8.

It was a combination of these bloodlines, which led to the birth of the bull Comet bred by Charles Colling in 1804, and later sold at the Ketton sale in 1810 for 1,000gns. This was the first 1,000 guinea bull ever recorded, but the wisdom of this bid was later to be justified by his progeny and he has since become a legend in cattle breeding.

Other outstanding breeders at this time, Thomas Bates of Kirklevington and John Booth of Killesby were developing the Teeswater cattle, and their names and fame live on today. The Bates strains were subsequently developed for their milking qualities, whereas the Booth families were developed for their beef qualities. Both were convinced of the value of inbreeding or line breeding to a degree previously considered unacceptable in cattle breeding.

In 1822, George Coates published the first herd book containing 710 bulls and 850 cows and Coates’s Herd Book became the first pedigree herd book for cattle in the world. The first four volumes were published by Mr. Coates, after which Henry Strafford took over the ownership and publishing of the herd book, which retained the name ‘Coates’s Herd Book.

After the formation of the Shorthorn Society of Great Britain and Ireland in 1874, the Shorthorn Society purchased the copyright of the herd book from Mr. Strafford and they have continued to compile and publish Coates’s Herd Book ever since.
The breed was used in the early part of the 20th Century, primarily as a dual purpose breed, but specialisation for beef and milk led to the beef breeders starting their own section of the herd book in 1958. Since that time the beef Shorthorns have been developed as a separate breed and in 1976 in an effort to improve the muscling in the breed, the Directors of the Beef Shorthorn Cattle Society sanctioned the use of Maine-Anjou blood into the breed. The herd book was then closed again to outside blood in 2001, except by introduction through Grading Register.

The dairy breeders also sought to improve the dairyness of their animals, and a blending scheme to introduce outside blood from other breeds was introduced in 1970. Some breeders did not wish to participate in this scheme, and so there is now quite a diversity of type within the Shorthorn breed. This diversity of type means that the Shorthorn can be used in a variety of different systems. In Ireland the majority of Shorthorns are used for their suckler/beef capabilities, whereas in the UK the milking qualities of the breed have been developed

The History of the Maine-Anjou


The Maine-Anjou breed originated in the northwestern part of France. This area is excellent for beef production as it has both grassland and tillable land.

At the beginning of the 19th century, the cattle in this region were large, well-muscled animals with light red coats spotted with white. These cattle were known as Mancelle breed. In addition to their size and muscling, the Mancelle had a reputation for their easy fattening. Leclere-Thouin, an agriculturalist, wrote in 1843 that on the community pastures of the Auge Valley, the Mancelle ‘were the last to be put onto the grass, but were the first to be picked out to go to the markets in the capital city’.

In 1839 the Count de Fallous, a landowner, imported Durham cattle from England and crossed them with the Mancelle. The cross was extremely successful, and by 1850 Durham-Mancelle animals were winning championships at the French agricultural fairs.
In 1908 the Society of Durham-Manchelle Breeders was formed at Chateau-Gontier in the Mayenne district. In 1909 the name was changed to the Society of Maine-Anjou Cattle Breeders, taking the name from the Maine and Anjou river valleys.

The society has worked steadily for the improvement of the breed. Breeders of the cattle were mostly small farmers whose goal was to maximise income from their small area of land. For this reason, the Maine-Anjou evolved as a dual purpose breed, with the cows used for milk production and the bull calves fed for market. It is still common on many farms to find Maine-Anjou being milked. In many herds, half the cows are milked and the other half raise two calves each.

The Maine-Anjou is one of the larger breeds developed in France, with mature bulls weighing from 2,200 to 3,100 lbs. on the average. Mature cows will range from 1,500 to 1,900 lbs. The colouring is a very dark red with white markings on the head, belly, rear legs and tail. White on other parts of the body is also common.

It is very important to point out the similarities in origin that both breeds have, (namely the Durham cattle) and also the role of the Maine-Anjou breed in what is now known as the Beef Shorthorn. It is also important to point out that this infusion of outside blood has greatly improved the muscling, and beefing abilities of the modern beef shorthorn.