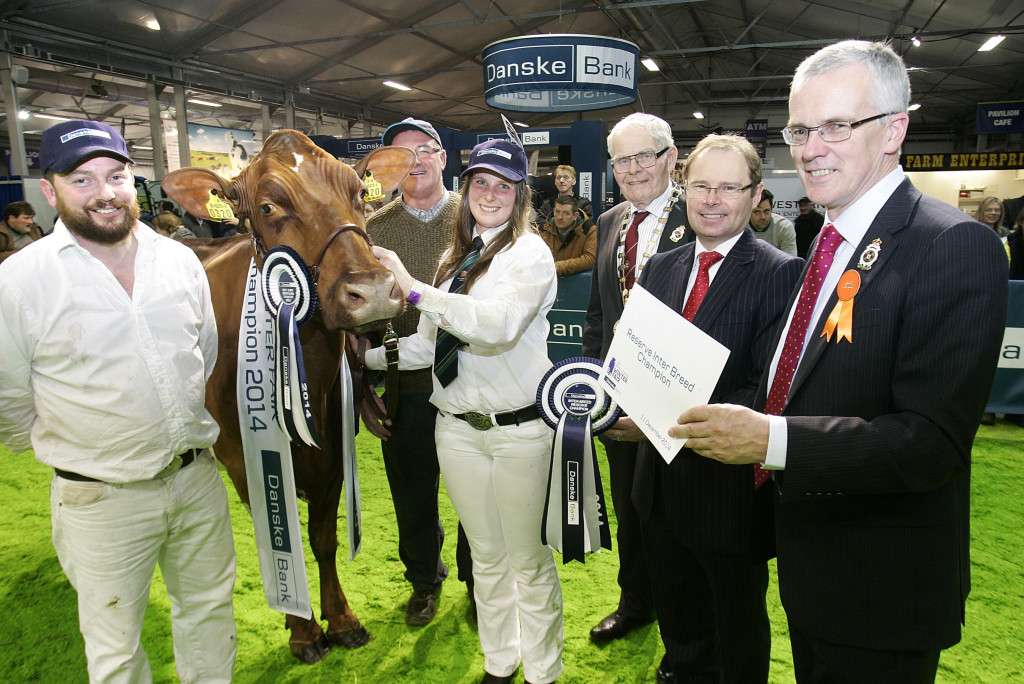 Success from the South
By Ann-Maree Manley
The Royal Ulster Winter Fair, Balmoral 2014 took place at the Kings Hall, Belfast for the last time before moving to the new venue of Balmoral Park, Maze Long Kesh, Belfast next year. Michael & Ann-Maree Manley, Monasteroris Milking Shorthorns also made a bit of history at the show. Setting off from Edenderry, Co. Offaly on Tuesday Dec 10th, Michael & Ann-Maree had Jennie in tow and Balmoral as the destination. Monasteroris Jennie Deans 8th is a 10 year old seventh calf cow. Jennie won the Dairy Shorthorn Senior Cow class and went on to take the title of Breed Champion also. The biggest cheer of the day went up when Jennie was tapped out as the Reserve Interbreed Champion.
Judge Brian Carscadden, Guelph, Ontario, Canada referenced this shorthorn cow specifically in his summary of the day, saying she was an outstanding example of the Shorthorn breed with excellent durability and a mammary you would expect to see on a cow half her age. Carscadden also said this is one of the best Milking Shorthorn cows he has seen in the world. This is high praise indeed as Brian Cascadden was recently voted number 2 in the world’s best and most respected judges.
Monasteroris Jennie Deans 8th is a home bred animal sired by Bilbro Stephen. Her mother Ballingarrane Jennie Deans 239th was purchased as a yearling from the now dispersed Ballingarrane herd of Tipperary. The Jennie Deans family has always been good to us with exceptional longevity and fertility. She produces around 1700gallons / 8000kgs of milk at 3.5% butterfat and 3.35% protein. The newly crowned Champion is sporting her third crown from as many shows.
The first time we showed her was as a fifth calver in July 2012 at Emerald Expo, Cilin Hill where she won Breed Champion. Jennie next returned to Emerald Expo April 2014 claiming victory once again. The Royal Ulster Winter Fair was her 3rd show. This cow is a prime example of the shorthorn breed with her strength, aggressive appetite, high fertility with 7calves in 10 years yet remaining youthful with fantastic feet and legs.