Roundfort Show on Sunday the 8th of June saw a nice display of Shorthorn cattle to spite of the wet overcast day. The cow class was won by James and Peter Gormley from Gortnadrass, Ballymote, Co. Sligo with a big framed roan cow.

The 2013 born male or female class was also won by James and Peter Gormley with a light roan heifer calf bred out of Creaga Dice. Second and third on the day was Chris Gainley, Co. Mayo with his two red bull calves.

Next to the class for animals born after the 1/9/13, which had only one exhibitor, this class was won by the Flatley brothers from Kilkelly with a red heifer calf bred by SBU. 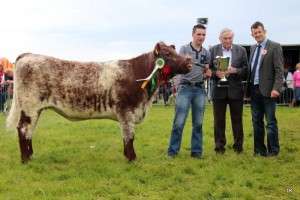 We would encourage more breeders to exhibit there cattle at their local shows as it is a fantastic shop window for your Shorthorn herd.