similar to a lot of Pedigree sales this spring. There was a less than 50% clearance on the day, but with

a noted increase in interest from Northern buyers, which has been the trend this Spring at a lot of


The Champion Male Clashagad Maddison was bred by Phil & Pat Sheedy, Roscrea, he was sold for

€2000 to a Northern Ireland buyer. Maddison is an Uppermill Maddison son out of a Buffalo Lake

Jobe is a Creaga Dice son out of a Cabragh Stephen cow. He remained unsold on the day. 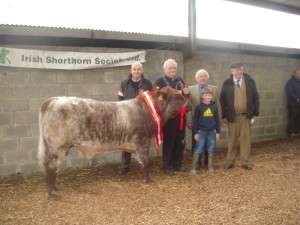 Ballinlough, Co. Roscommon. She was sold to a Beef Shorthorn breeder from Cork for €2250. Kate

was a Sliabhbui Prince daughter out of a Tullagower Peter cow. The Heneghan Brothers also bred

the Reserve Champion Female on the day Jackie April. April was sold to a Northern Ireland buyer for 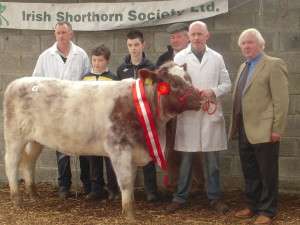 On the day over 80% of the bulls sold went for Export to Northern Ireland.